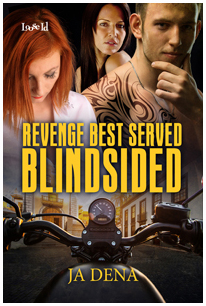 On a mission, Willow Burgess finds herself in El Paso, Texas, the home of Denver Hayes – respected sales representative with a hidden, violent past. The ex-biker is about to find out he can’t screw with a woman’s life, leave her to his outlaw brother whom she’d been trying to escape, and walk away without a scratch. Now that the brother has been dealt with, it’s time to make Denver pay. Show him he isn’t the only one who can use sex as a weapon. Before the day is through, she’ll have him between her legs, betraying the brother he’d been so loyal to.

She should have known the take-charge hottie who’d seduced her to the dark side of sex wouldn’t go down so easily. When Denver takes Willow home, he turns the tables on her yet again, setting her down another path of sensual discovery without even touching her. As she pulls out all the stops to break him, they initiate a battle of sexes that just may prove too hot to handle. Can she survive her own revenge without losing her heart in the process? Or did Denver own it all along?

Willow’s attempt to escape her toxic relationship with Lane ends the moment her car is stolen—with all her worldly belongings inside it. In a desperate attempt to get her stuff back, she accepts help from a handsome motorist, Denver, who offers to take her back to Vegas. On the way, Willow discovers Denver has a knack for sexual persuasion and finds herself bending to his will, his command, and his passion for anal sex. But her first round of uninhibited play turns into her worst nightmare when it’s revealed that Denver is actually a member of Lane’s dangerous outlaw brotherhood.